This document aims as a single resource for all information related to Apertis Release Process. It covers the Major Release process as well as the Point Release process.

The Apertis project is hosted on a couple of infrastructure services, which are tightly coupled to each other, providing end-to-end automation. This includes:

This document stands as a comprehensive guide to all package related processes as outlined above.

Below are a list of tasks that are usually required to be run before planning the execution of a release.

Archive Rebuilds are done before a release to ensure that the entire repository of packages are in good shape, can build proper, and that all their inter-dependencies are satisfied. The recommended timeline for an archive-wide rebuild is right after the Feature Freeze. Once a freeze is in place, we don’t anticipate new changes to be introduced, and thus this is the optimal time to re-build all the packages slated for the release.

Note: An archive-wide rebuild is a time consuming task. Depending on the build infrastructure, it can take large amount of time. Thus, it is important to account for this time and plan a rebuild accordingly to ensure we have proper build images for the first Release Candidate, which is typicall 2 weeks from the Feature Freeze date.

Some notes about the Archive Rebuild task

At a higher level, Release Branching includes the following steps which needs to be run in close co-ordination.

The release process has been semi-automated with the Gitlab CI framework. The following screenshots/notes will give a run through of the steps, to make a release. 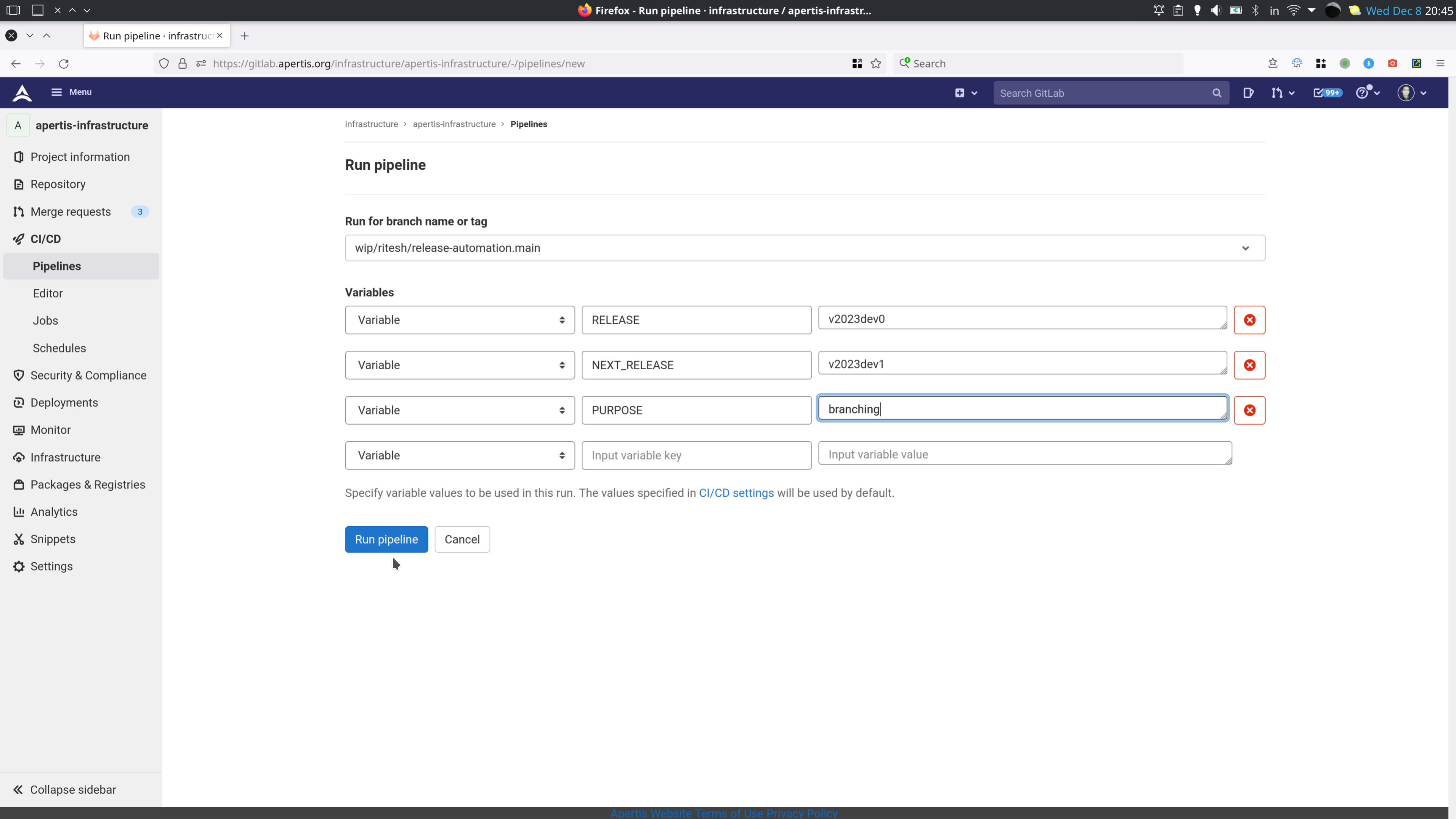 This is the inital step to trigger release branching. Here:

Note: NOACT has been deliberately left out in this example screenshot. So, in this case, the entire procedure will run in dry-run mode. To run in effective mode, pass NOACT with value 0 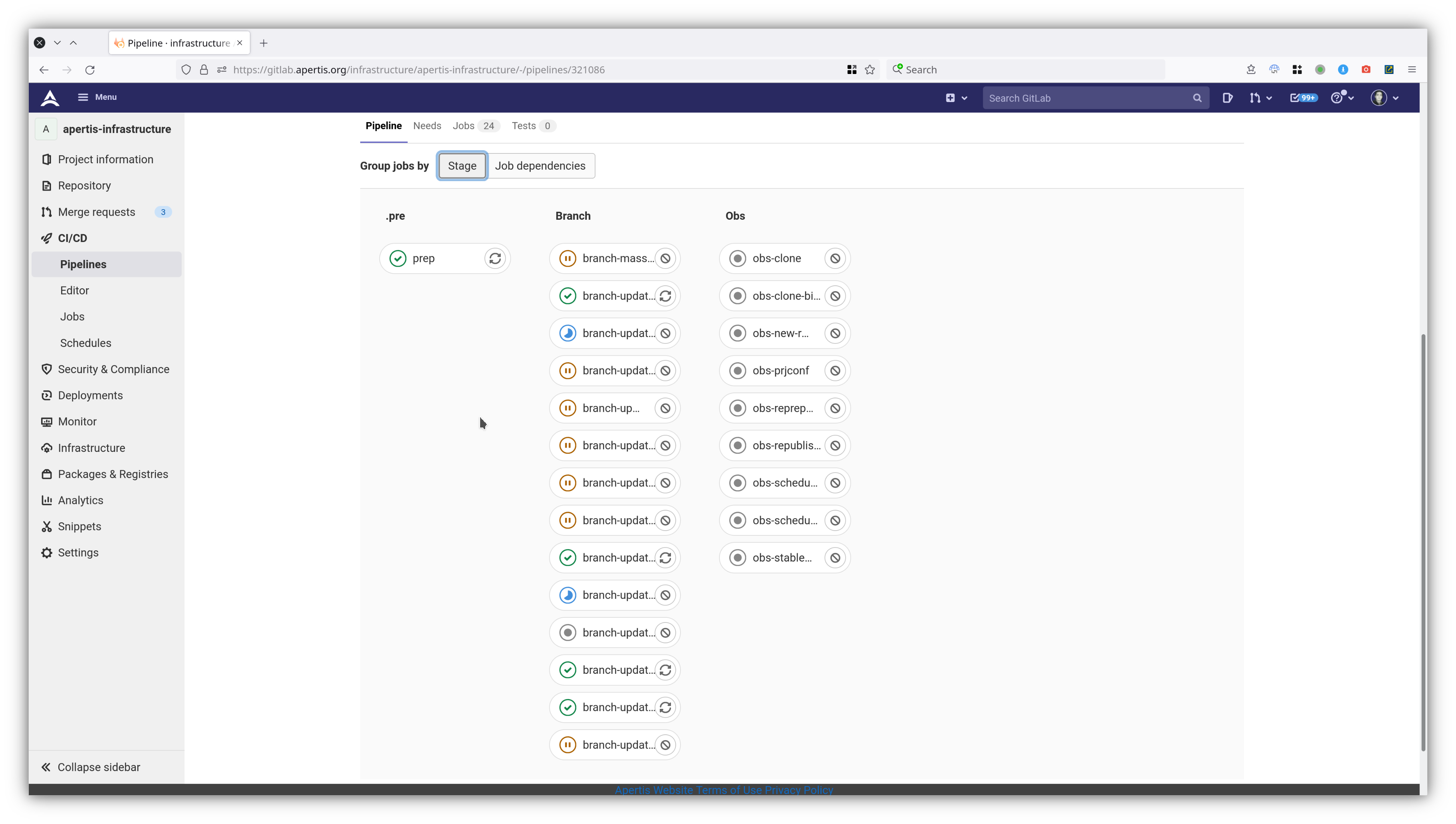 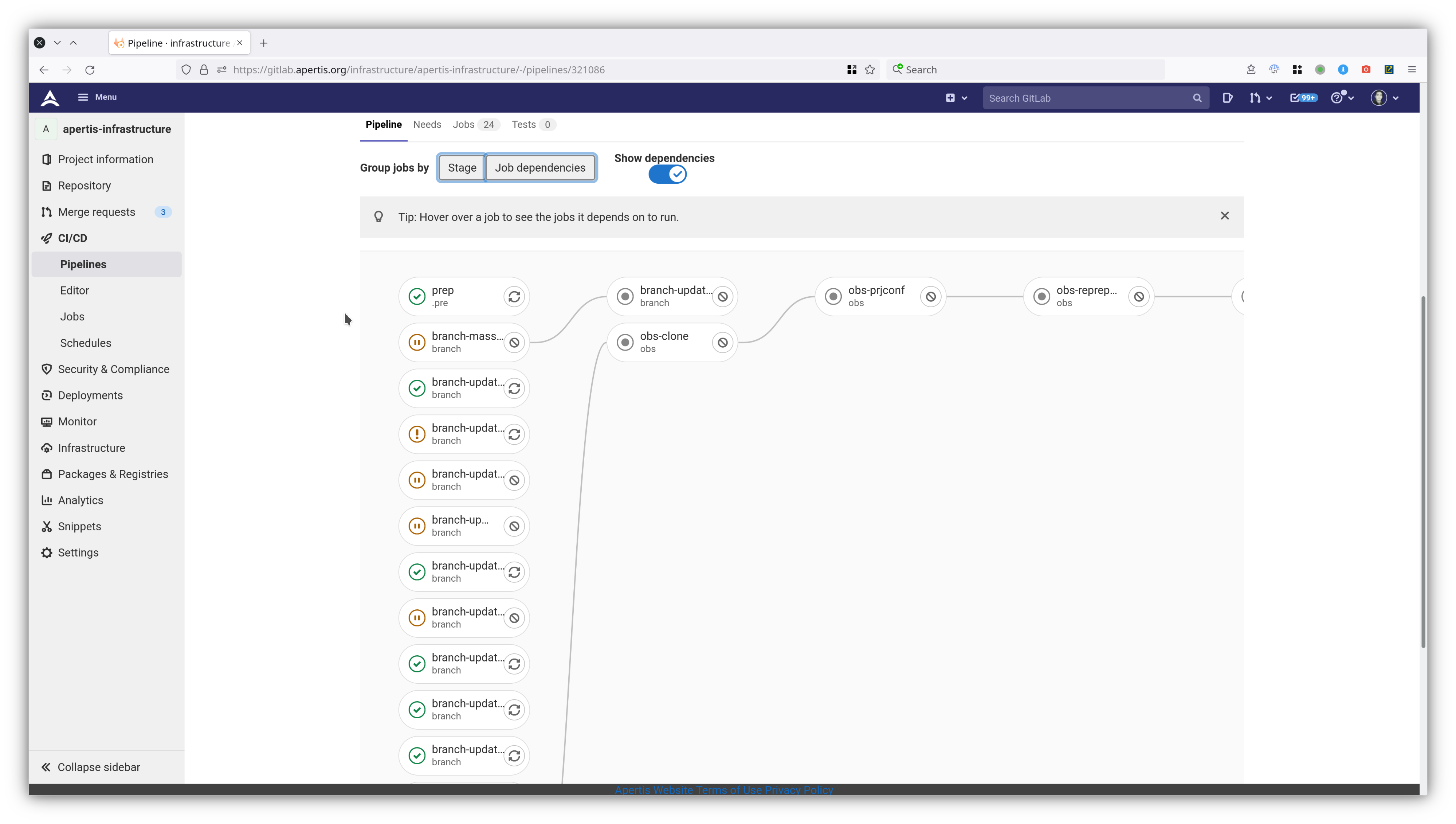 This is an example of the same jobs, with their dependencies chalked out. There are multiple jobs that depend on one another. This is to ensure that jobs, that depend on certain outputs or tasks to be completed, are run only after. 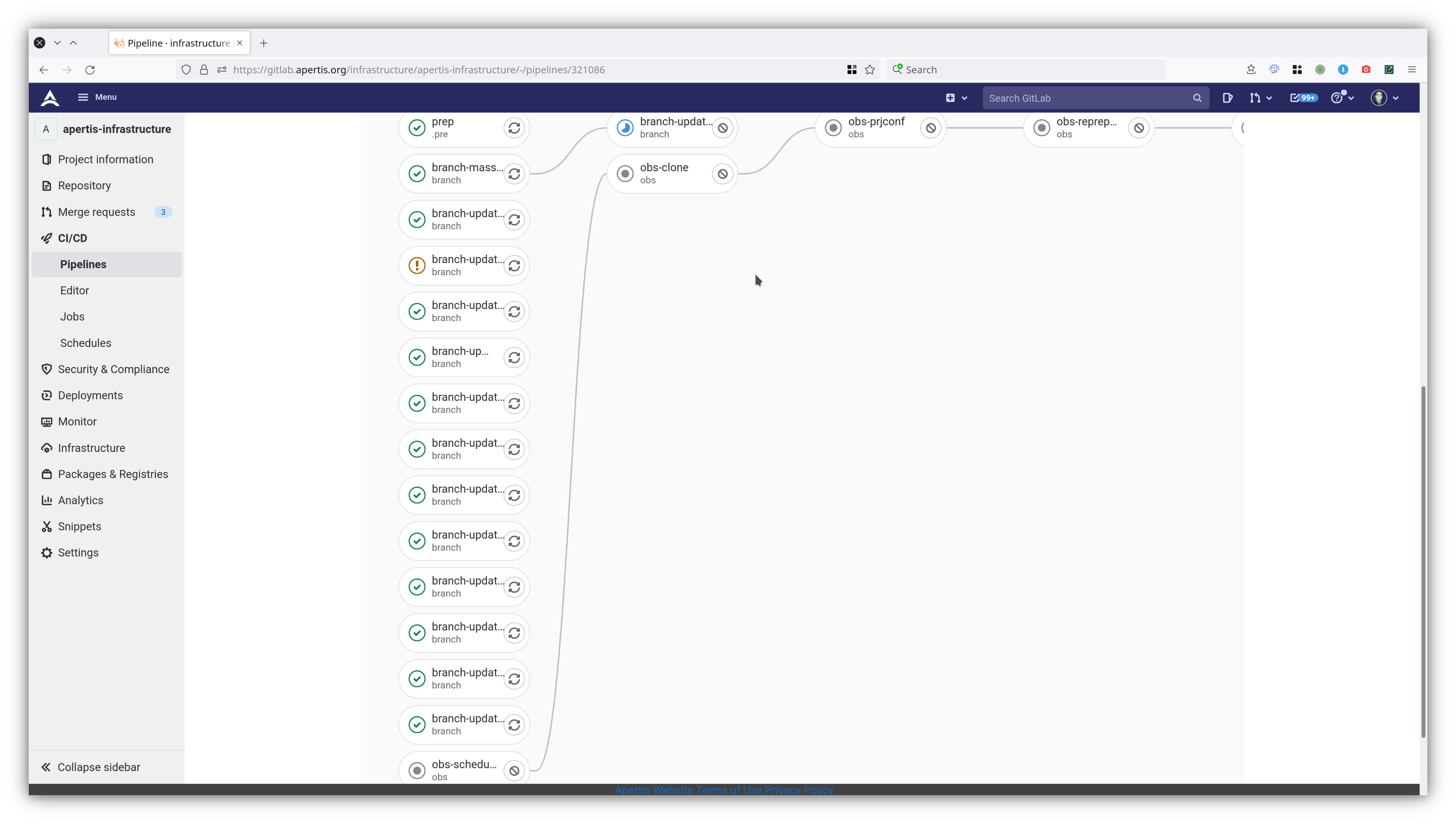 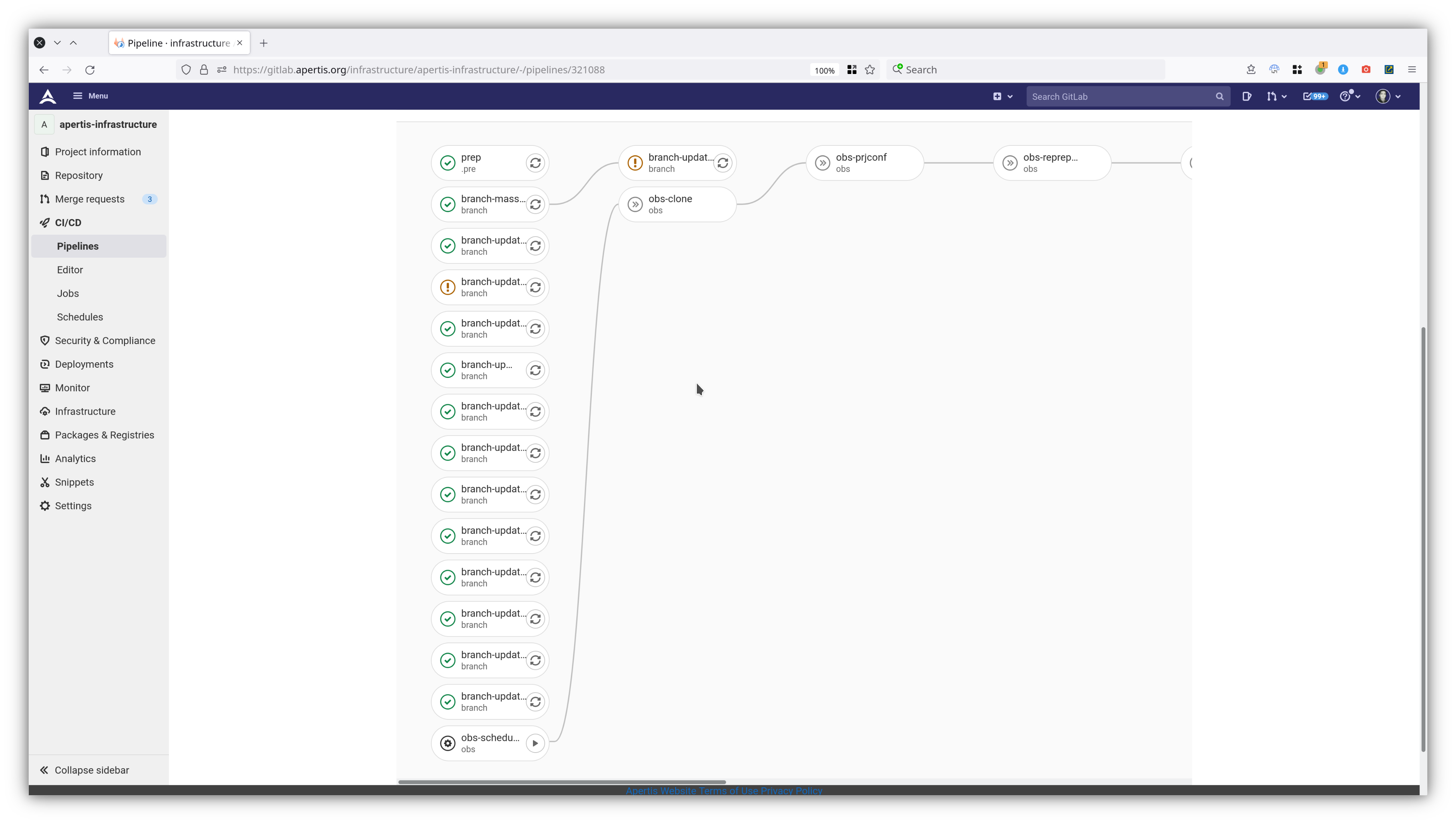 This example highlights Manual Jobs and their dependencies. Manual Jobs are differentiated with the Play Button. A Manual Job is to be run manually by a user. In the context of this document, a manual job constitutes of certain commands that the user is expected to run by hand on respective servers. Most manual jobs, in this case, are to be run on the OBS Backend server. For each manual job, the exact commands will be displayed in the job’s console view. 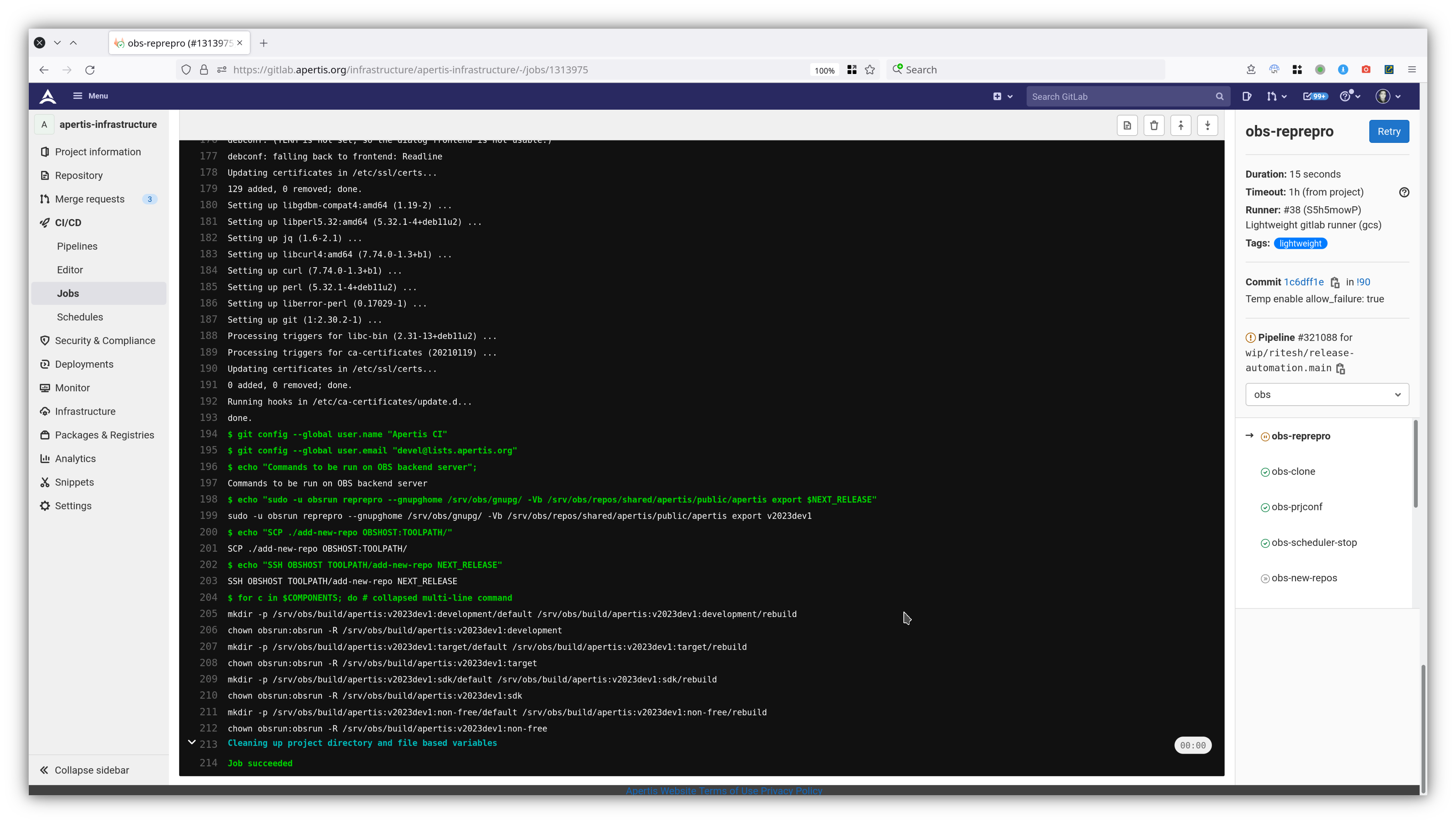 This example highlights the exact set of commands that should be manually run. Most commands to be manually run, are to be run on specific servers, which will be mentioned in the console output for the particular job. 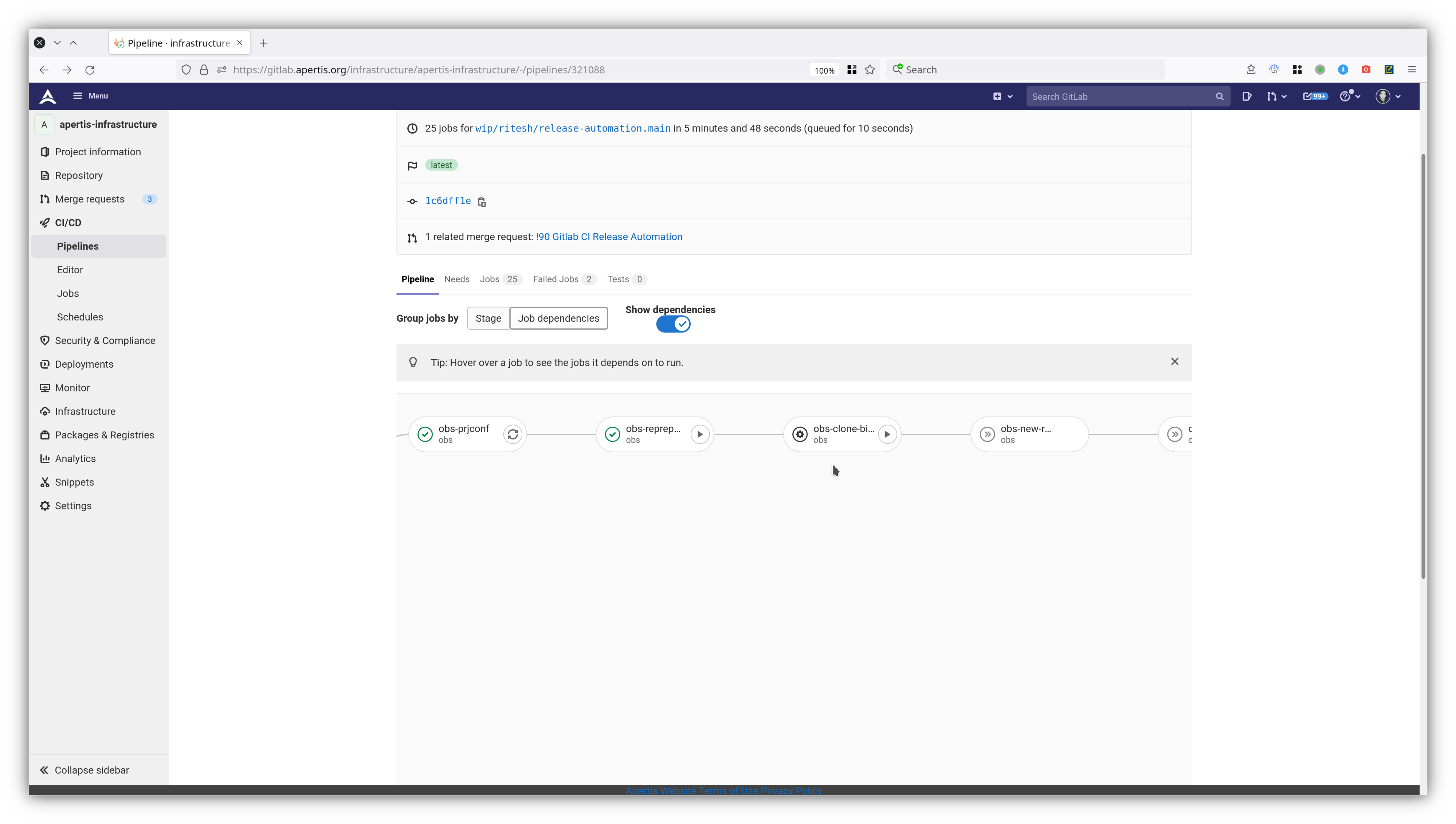 Most manual jobs are made dependent on other job. This is to ensure that steps are performed in a particular order. In the above example, the dependency is defined as: obs_prjconf => obs_reprepro => obs_clone_binary, where obs_prjconf runs a certain set of tasks, which are needed by obs_reprepro. Similarly obs_reprepro performs a certain set of tasks which are a pre-requisite for obs_clone_binary. The job chain is strictly defined and users should ensure to successfully run the manual jobs on respective servers, before progressing to the next job.

The above example complete the semi-automated aspect of the Release Branching steps.

There can be scenarios during the Release Branching wherein the user would be required to re-run the entire pipeline. Under such situation, it can be desired to have certain specific jobs to be skipped from the consecutive pipeline run. For example, in first run, branch-create-mass-branches was run and it created all the branches in respect to the NEXT_RELEASE. For such cases, on consecutive run, it is desired to skip the branch-create-mass-branches job. Below is an example on how to invoke the pipeline while defining a set of jobs to be skipped. 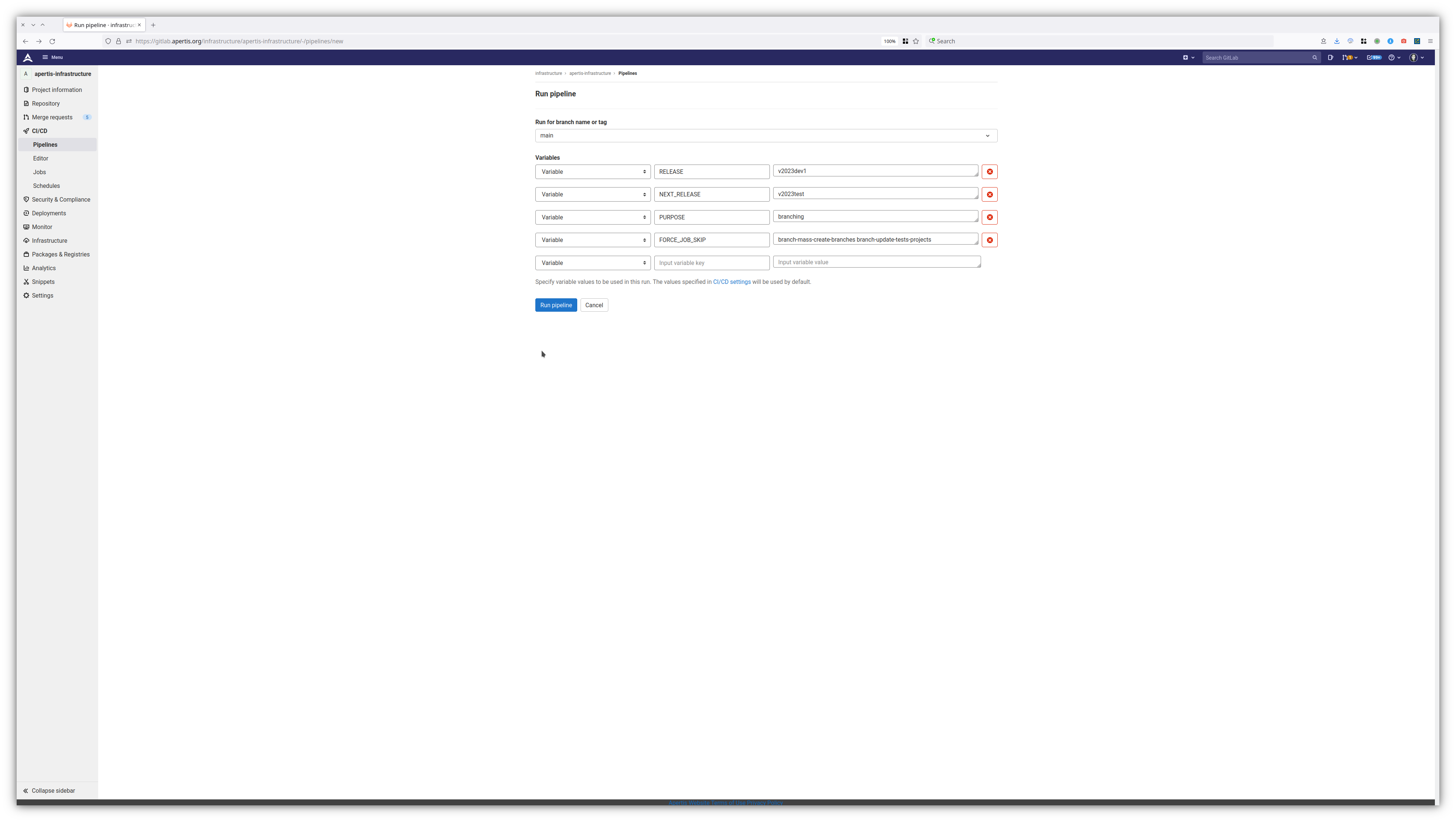 In the above example screenshot, we specify that the branch-create-mass-branches and branch-update-tests-projects jobs be skipped. The important bit is to pass the FORCE_SKIP_JOB variable with the required values. 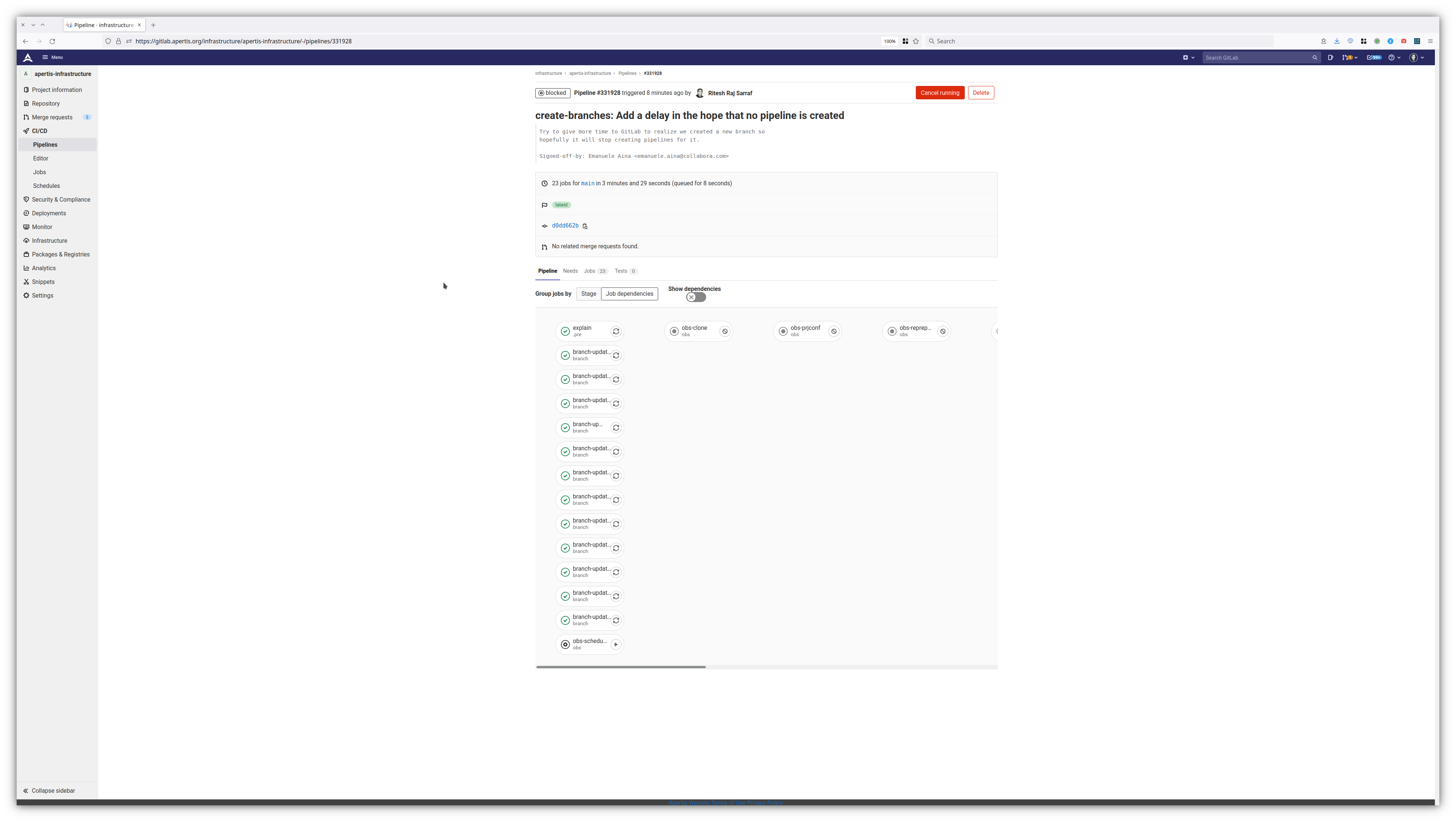 As was specified in the previous job invocaton, this example pipeline job run has the branch-create-mass-branches and branch-update-tests-projects skipped.

After the completion of the Release Branching CI Jobs, a certain set of manual steps need to be performed, which are outlined below.

For every release (Developer, Preview, Product), we add a build suffix string to the packages, which relates to the release name of Apertis. The build suffix gets added to every built .deb package. Having a build suffix helps determine which Apertis release the .deb package was built for.

The suffix string is constructed of: b + Release Name + b<B_CNT>

For Point Releases (Eg. v2019.1, v2019.2), we need to update the build suffix to ensure that the packages in the new point release have a higher version than the one in the updates or security repository.

This will ensure that the packages synced from the :updates and :security sub-repository will have a higher version, when they are synced to the main repository

Point Releases for the Stable Release happen on a timely cadence as defined in the Release Schedule. A Stable Point Release includes:

Launch fold-security-update-branches script from the apertis-infrastructure/release-scripts/gitlab/, which automates many of the steps in a Stable Point Release Preparation

Following are the example runs for the automation script.

The gen-pkg-list sub-command generates a bunch of data files, based on the Apertis Release and Apertis Repositories. These generated data files are used by the script to process changes (Security and Regular Updates) in Apertis point releases.

The dry-run sub-command will run the actual commands without any effect on the server-side. This is very handy to check and determine the actual actions that will be run.

The apply sub-command does the actual job.

Perform the following steps to remove an old distributions. This would usually be the obsolete Beta and Preview distribution releases, like: v2019dev0, v2019pre

Given the number of steps involved in Release Branching, the following Branching Checklists should be executed in close co-ordination.

There are a couple of checks to be performed on individual host machines. The machine names mentioned are specific and should be adopted to users’ environment